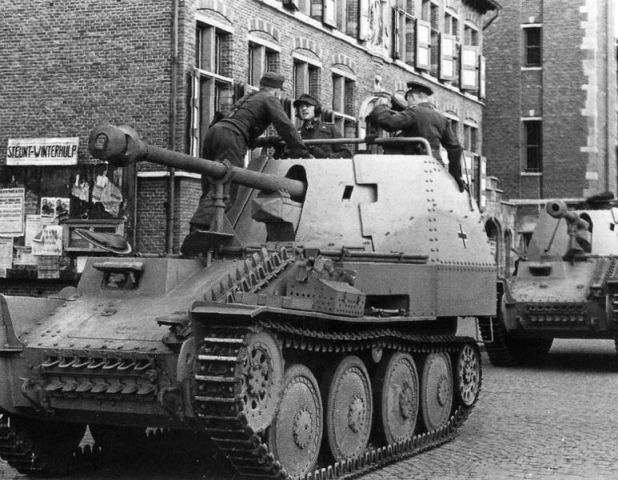 The SdKfz 138 Marder III was a self-propelled anti-tank gun (tank destroyer) that was constructed in two variants, the Ausf. H and Ausf. M,it was built on the chassis of the Panzerkampfwagen 38(t) tank.

The Ausf. H had the engine in the rear of the vehicle, (Ausf. H standing for Heckmotor, rear engine), same as Panzer 38(t), lately the motor was moved to the center of vehicle, for the definitive version the Ausf. M (Ausf. M standing for Mittelmotor, middle engine) Both versions of the Marder III were armed with a 75mm PaK 40/3 L/48 anti-tank gun. 975 of the Ausf. M variants were produced by BMM between 1943 and 1944.

All of the Marder series of tank destroyers were improvised designs that used existing chassis. These were intended to provide the Germans with anti-tank capabilities until true, custom-designed tank destroyers, such as the Jagdpanzer and Jagdpanther, were constructed.

As usual Tamiya do an excellent and easy to build kit, in this one the kit don’t providing a cast metal hull, Tamiya has included six weights that are to be screwed to the interior bottom of the hull to provide that weight.

The kit is superbly molded as we have come to expect from Tamiya. The tracks are link and run type with slight sag already molded into the upper run. The fighting compartment is really impressive the detail provided by Tamiya. The shell racks are also very well done, the PaK 40/3 anti-tank gun is provided and is very nicely detailed. Tamiya also provides a figure to pose with the completed model.

Instructions are quite well done, there are 19 construction steps with smaller detail drawings to help with installing some of the bits, this kit is for enjoy and have fun, only a bit tedious the excess of mould circles, it was filled and carefully sanded, some PE pieces to detail the tools, copper wire for the handles and this is all… Note: This model will be for the annual Almeria Association Contest ruffle, the model was assembly by Emilio Bonachera Lopez.